On this page, we are going to provide you with essential information about the FTC and FCC regulations in vogue. We would suggest that you do not consider it as a substitute for legal opinion of your attorney and neither should you consider it as a replacement for legal advice. In order to be sure of what regulations your company is bound to comply with, you are strongly encouraged to discuss with your legal advisor or the chief compliance officer of your company. The industry of tele-services on the whole and consumer sales related telemarketing activities have transformed over the years. Increasingly complex and strict Do Not Call laws have made the compliance a painful and const intensive process. Below is provided an overview of the most current regulations in place and how you and your company can ensure initial compliance and maintain it.

All telemarketing and other tele-services related laws and regulations are governed by two American agencies named as FTC (Federal Trade Commission) and FCC (Federal Communications Commission). Some other industries like financial services industry are regulated by even more strict rules and regulations which are prescribed and monitored by other regulatory agencies. There are also local laws governing the call center operations which vary from one state to another.

All phone calls that originate from or terminate in US are within the jurisdiction of FCC. Most of the commercial activities with exception of some industries like financial services are regulated by FTC. Both of these bodies have prescribed similar rules which create a DNC list. Abandoned calls and predictive dialers are also regulated by these laws. FTC is the body that governs disclosures, advertisements and other communication via mail, fax or email.

It was in 2003 that consumers were given two options to enroll themselves in DNC list which was maintained through internet or by calling a toll free number. A total of 55 million participated in creation of the DNC list by December of 2003. The national DNC list was also inclusive of DNC lists maintained by states. By the close of June 2004, more than 63 million people had registered in the national DNC list. When someone enrolls in a DNC list, it is active for five years and requires renewal after five years. This national DNC list is available for purchase by the telemarketers who should purge the numbers contained in DNC list from their database of numbers at least once during 31 days. The separate list is required for the companies who outsource their call center operations and the companies who will be using the list. All these companies have to purchase the list. Do Not Call registries were initially maintained by AT&T, however, new contract was awarded to some other company in 2007 for administering the list. Revised Telephone Consumer Protection Act of FCC and Telemarketing Sales Rule of FTC jointly govern the national DNC list.

State specific rules or local rules are also required to be complied with when markets make calls in a particular state. At present around 35 states have either created their own DNC list or are in the process of creating one to regulate the marketing calls. Many regulations exist in states which regulate the registration of telemarketing firms. Some of the rules prohibit telemarketing companies from hiding their calling ID while they make calls and the companies are also prohibited to indulge in rebuttals when consumer states that he is not interested to receive the call. Most of the states have eavesdropping rules that require consent of one or both parties before calls can be recorded or monitored. Increasing states are enacting rules which make it mandatory for people who would be seeking contributions and donations for charities. Some states only require that the charity registers and not the persons who will be working for it.

DMA stands for Direct Marketing Association. It has also created and maintained its own DNC list from as far back as 1985. The website of this organization has a lot of information about it.

All the court challenges to these regulations have now reached completion and courts have upheld these regulations. Now these rules are in force for all practical purposes and require compliance. If a company opts for non compliance, it may have to pay large penalties and fines in monetary terms. Additionally it may invite bad press and damage its reputation along the way.

Charities and politicians are the most notable of the exemptions given from the DNC list rules. Politicians have been given exemptions from almost all the telemarketing rules because it has been considered that telemarketing by politicians is an exercise of free speech right. Many exemptions are also available to charities. Third party commercial companies placing calls on behalf of charities are, however, subject to telemarketing laws and make face fines up to $11,000 in case of non compliance.

FTC laws are not applicable to telephone carriers, regulated businesses, airlines and some of the financial institutions but still they are required to follow DNC lists and abandoned call provision because though they are within the jurisdiction of FCC. The predictive dialer rules have been adopted by FCC in consultation with FTC.

FTC and FCC laws permit placing calls to people on the basis of established business relationships and companies are allowed to call people on DNC if they purchased any product within the previous eighteen months or applied/inquired for any product during the previous three months. However, if the consumer had explicitly requested that he should not be contacted, then calls cannot be placed to him. In such cases, the contacts should be clearly included in the specific list of company which is a requirement since 1995 by FTC and 1991 by FCC.

Establishment of a Compliance Checklist

If a company maintains a compliance checklist, it can really facilitate the continuous compliance with laws and regulations in an efficient and economical manner. 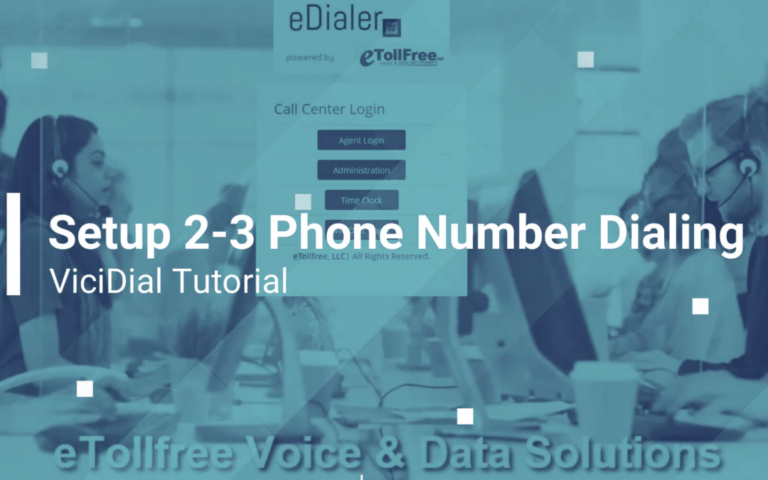 How to setup 2-3 Phone Number Dialing

Vicidial How to Setup Quick Transfer